Hypnotizing the mad Professor Sanders and then the same Indios who worshiped him as the reincarnation of Kululkàn, El Morisco decrees the end of the vile speculators who were plundering the riches of the Mayas. Later, the pards’ are charged by the army with stopping the Kimballs, a clan of inveterate thieves. Jesse, the youngest of the offspring, is in the hands of the law and his escape, using Kit Willer as an infiltrator, is used to capture the rest of the gang in their hidden den of Last Paradise! 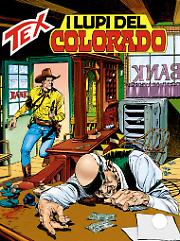