Introduction: Tex must avoid that Seminoles blood could turn the Everglades' waters red!

Tex and Carson arrive in Fort Bliss, Louisiana, to take Seminole Ochala from jail and escort him to a Texas' Court. The Indian is accused of brutally killing a local cattle breeder and attacking two Rangers, causing the death of one of them. During the attack, Cajun scout Lafarge was injured, and he now can't wait to see the Native assailant hanging from the gallows. Just before the prisoner is entrusted to Tex and Carson, Longknife, member of Ochala's tribe, manages to free his friend from his cell. The two men disappear into the night. Tex e Carson start tracking the fugitives down, determined to hand Ochala over to the Law and at the same time to protect him from all the people who'd rather see him dead without a fair trial… 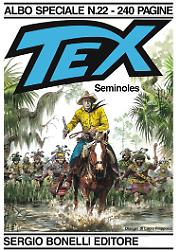