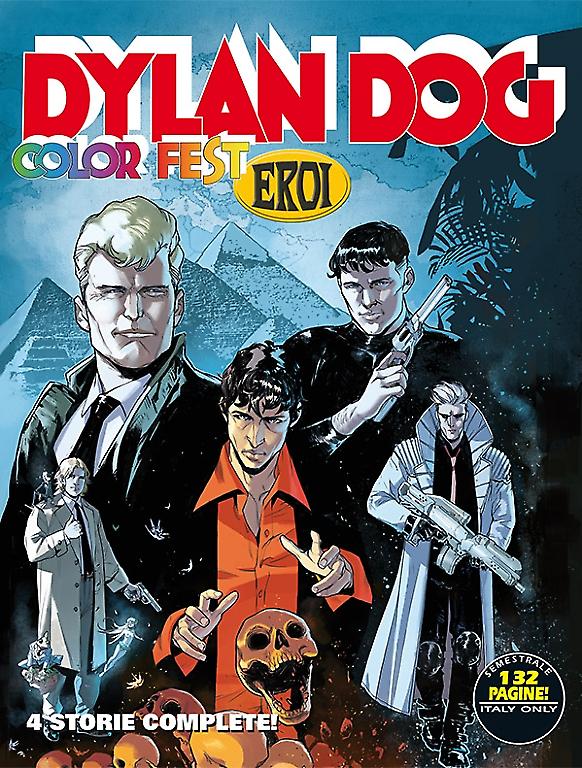 Ananga, the immortal jaguar spirit, the rage of the violated Nature. The God of Evil gave a lot of trouble to Mister No, the pilot from Amazonas, during the 1950s, as well as to the Nightmare Investigator, several decades later. Now he’s back to disseminate death, and he’ll have to face both characters, when they join forces to vanquish once again the dark fury of this primeval Beast.

Why does the Nightmare Investigator wake up in Martin Mystère’s office, seeing Java appear instead of Groucho? Why does the Detective of the Impossible wake up in the dweller of Craven Road’s home and is forced to suffer a salvo of hoary jokes by Dylan’s assistant? And what’s the connection of all this and the two enigmatic half-spheres that stand in both places?

“Time has no beginning and no end, it is eternal, there is no before and no after: time has always been and will be forever. Time simply IS”, says a Mr. Perkins, who’s staying at Napoleone’s Astrid Hotel. Dylan and the entomologist-detective are thrown into a story that uncoils with continuously changing time-space modes. And the one who goes back and forth between London and Geneva, between the 1990s and today, holding everything together, is Allegra, the resourceful girl who’s the apple of Napoleone’s eye.

Kevin Vlakar, the technomant, almost made it: he reached an ancient archaeological site where Dylan Dog’s study remained buried for centuries. A demon trapped inside Dylan’s diary manages to escape, and transfer inside the net, using a computer. Nathan Never can only go into the cyberspace to catch him, and he’ll have his loyal Sigmund Baginov fighting on his side, but with a virtual avatar: Dylan Dog.