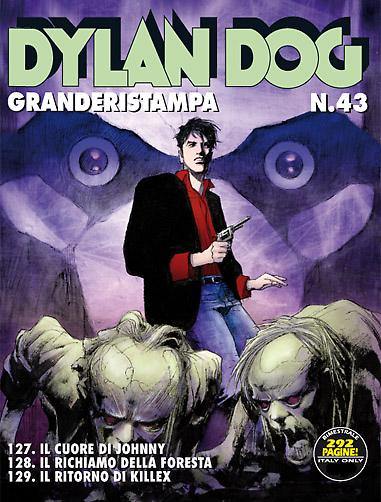 Introduction: An unforgettable friend, crimes buried under a skyscraper and Dr. Killex coming back from death!

Johnny Freak is dead, he died long ago. But behind him, there remains the shadow of the horrors he had suffered: his parents have been killed by a ruthless hand and his step-brother Dougal – the most terrible of his persecutors – has vanished into thin air. Who is carrying out this revenge? Is it really the ghost of that old friend? Dylan can’t believe it, because he knows that hatred has never found a home in Johnny’s heart!

Edward Hobbes wants to make a dream come true: to build the Azure Tower, an imposing skyscraper intended to be a symbol of his power. But his glory is rising on the back of the wretchedness of man and the death of nature, on crimes buried under silence. Jamais Nonplus is at Dylan’s side to help him decipher the ancient forces that are trying to turn that dream into a nightmare. Ancestral spirits that rise up again from the very origins of mankind…

A staring piercing gaze, as if the eyes could see beyond the flesh and bones, in search of the soul! This is the gaze of Christopher Killex, who has come back from the dead to shine in the eyes of a child. But what is his aim? Why has the terrible murderous surgeon entered into the body of little Chris? Perhaps he’s not seeking revenge, perhaps he’s trying to tell a truth that only he can know…