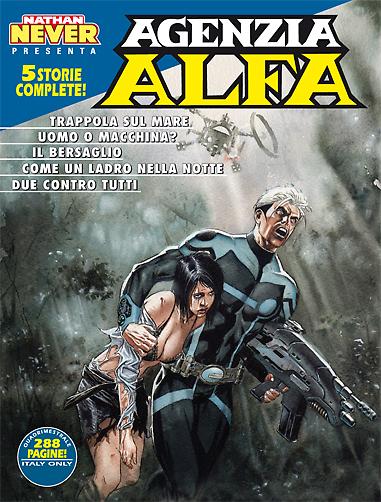 Introduction: No rest for the Alfa agents, from the deepest recesses of Eurasia to the forests of Mars!

During their holidays on a ultra-modern sailing boat, the Alfa agents May and Branko help a young woman in danger. But when they try to save her husband, who’s kept prisoner on another boat, May and Branko spring a diabolical trap...

Nathan Never and the android Link have to escort a man accused of several crimes to the Agenzia Alfa HQ. But this villain – who has been subjected to scaring bionic transplants – is also the target of a criminal organization that wants to get rid of him...

An apparently ordinary day, at Agenzia Alfa, when all of a sudden on all the agents’ computers a mysterious figure appears, revealing that the building has been undermined. Our heroes will have to race against the clock to defuse the bomb and realize the true plans of the unknown blackmailer...

On a mission in a faraway corner of Eurasia, May is charged with the recovery of the prototype of a new kind of detonator. Realizing she won’t be able to do it alone, the agent will have to ask an unlikely and very young partner for help...

Sent to Mars to solve a territorial controversy, the director of Agenzia Alfa, Elania Elmore, is kidnapped by a group of rebellious Martian settlers. The task of saving her is given to Nathan Never...