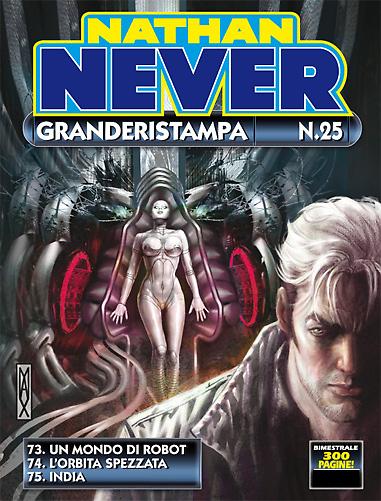 Introduction: Ruthless Robots, Skotos diabolical plans and a gynoid as a life companion...

The robot Aldus is in prison following the kidnapping of Dr.Sung, and is put by Dr.Vetrov on the ‘electric sheep’ program which makes him ‘sleep’ and ‘dream’. Aldus manages to escape from prison and take shelter in the Phoenix space laboratory, taking control over the entire laboratory. After killing Vetrov during one of his missions, Nathan finds out about Aldus’s escape and decides to get onto Phoenix incognito. In the laboratory he finds himself confronted with a ruthless enemy…

Mister Quaid, the owner of farm business in space, asks Aristotle Skotos to destroy Urania’s crops so that he can become the only food supplier to Earth. Skotos sends the telepathic killer Raven onto the orbiting station. Nathan travels to Urania as well to visit his sister-in-law Madeleine Novak, Laura’s sister, and his little niece Chris. Raven is in touch with a group of Urania freedom fighters, and has a nuclear bomb with him which he wants to use to blow the station up...

The wealthy Mr. Koike has India, a female company robot found on the sea bed, re-activated and begins to share his life with her, even teaching her hanedakendo, a sort of flying fencing. When Koike is found dead after one of these training sessions, Nathan, Legs and Sigmund are asked to investigate the company with which Koike had taken out an insurance policy. Suspicion falls on the two children of the deceased, the artist Tetsuo and the yazuka Kaneda…