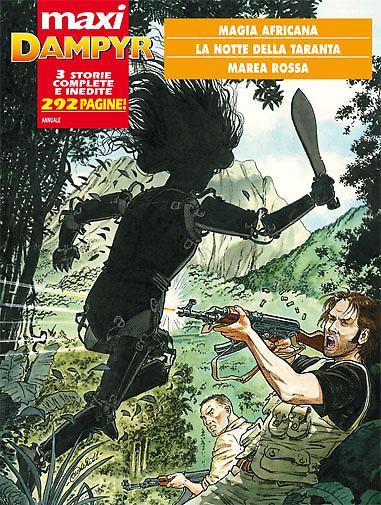 In the middle of the bloody clash of two African warlords, Lisimba and Mabasi, there’s a mystic variation: the “black ‘mbandwa”, the black magic able to animate killer amulets using the power of the mind. called by Arno from the “Medical Team”, Harlan and co. will find themselves caught in the crossfire...

La notte della taranta
Plot and script: Alessandro Crippa
Artwork: Arturo Lozzi
Under the Salento sun, musicologist Giordano heals the neurosis of his female patients with a therapy based on the obsessive rhytm of the “taranta” music. A dead body in the fields, covered by tarantulas, brings back to light a mystery buried in the past, its solution hidden in an old unhallowed church...

Marea rossa
Plot and script: Andrea Artusi e Ivo Lombardo
Artwork: Luca Raimondo
In the Philippine Sea, the mad scientist Diunerjuf, lord of the zombies, revives the dead with a scientific concoction based on the venom of the fugu, the globefish. Dampyr will seek to ally with other scientists to find a remedy for the army of the living dead...