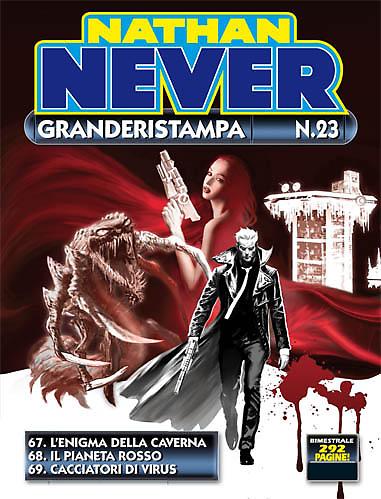 Introduction: From the desolate lands of the Territory to the surface of the Red Planet and the abyss of the digital network...

Greta Dorman hires Nathan in order to find her mother Diana who has mysteriously disappeared. Diana is a naturalist who studies mutated animals in the Territory, such as centipaws. With the help of one of Diana’s friends, John Adams, Nathan retraces the woman’s last movements and finds a huge cocoon hidden in a cave. The Alfa agent finds out that Diana has gone to Mars, so he asks Jerry Lone to take him to the Red Planet. They set off with another travel companion, Gloria, with whom Jerry is madly in love: she’s a rememberer who is being hunted down by Yakuza…

Once on Mars, Nathan, Jerry and Gloria try to contact Rufus Kelsen, a friend of Jerry’s, but find him killed by the cruel superintendent and his mechanical dog P’tichou, after Rufus contracted the Strikeshape virus. Helped by the youngsters Twinky and Pinky, Nathan tracks Diana down in the Martian underground world, where the Gophers live. But to get to her, he must go deep into the territory of the mysterious, terrible, Proteus…

After the appearance in the IT network of harmful viruses, which are destroying research centers and data banks, the military, led by Colonel Ballard, give Agenzia Alfa the task of destroying the viruses. Nathan and Sigmund try to trace the only person capable of entering the network and getting rid of the viruses. This is the hacker Harry Case, who, after an accident, stopped working in cyberspace. But also looking for Case is the Mafia godfather Bob Sarrese…