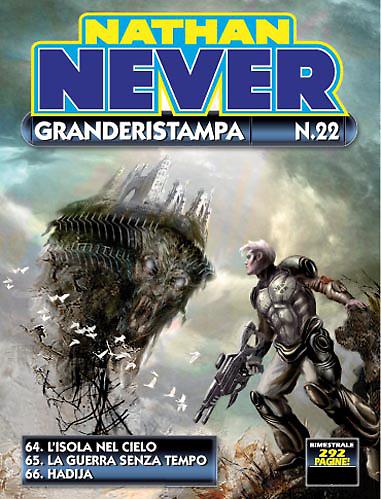 Introduction: Atlantis attacks, Amon gets ready for the dominion of the world, and enters Hadija!

The Macrotech space lab blows up, and the generator antennae are flung down onto the city of New Nassau, destroying it. The antennae arrange themselves in a formation that creates what used to be the Bermuda Triangle. The Agenzia Alfa is called upon to investigate the disaster. Nathan Never, Legs Weaver, Jack O’Ryan and the robot which has the mind and appearance of Martin Mystère gather together on one of the antennae to study how it works. But here they are confronted by Mu’s evanescent warrior, Aurora…

Nathan Never, Martin Mystère and Aurora find themselves on the island of Atlantis, that lies in the middle of the ocean but has been protected and made invisible by the electro-magnetic field of the three antennae that have transported it to Earth from another dimension. While Sigmund manages to receive information on his computer which had been connected to one of the pylons, Nathan, Martin and Aurora go deeper and deeper into the city of Atlantis until they find themselves face to face with the awful Amon, ready to dominate the world…

While taking a holiday from work, Nathan meets a fascinating lady, Hadija Hab’Ahmal, who is staying in a rented apartment on the ground floor of the same building where the Alfa Agent has found holiday accommodation. Once they have overcome their initial mistrust, the two fall in love. But Hadija, who is an expert in computers and works for Tice, an automobile company, is among those suspected of sabotaging the company’s cars. The investigation into this matter is entrusted to none other than the Agenzia Alfa, in particular to May and April…