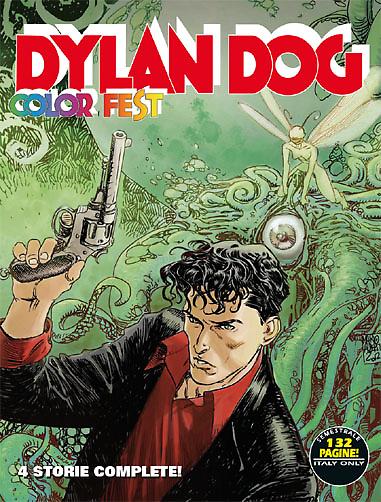 To recover after a hard clash with a ruthless serial killer, Dylan Dog unwillingly accepts to spend a brief vacation in a seaside resort populated by strange characters. But a chain of horrible crimes will spoil his relax.

Tod, a young man in dispair for the death of his fiancée, asks the dweller of Craven Road for help — he’s being haunted by a string of nightmares where the girl is desperately asking him to save her, before ice can swallow her. A case Dylan will be forced to accept in August, when the young man is found… frozen to death!

An old lady, the owner of a notions store, has a problem with the thousands of buttons of her shop: night after night, somebody has fun in throwing them everywhere. And the woman has a hunch that the reason could be an infestation of gremlins!

A quiet house is shocked by a violent poltergeist, that’s spreading panic and fear among the people who live there. Called for the investigation, the Old Boy will find out that the place conceals a tragic story, buried in time...