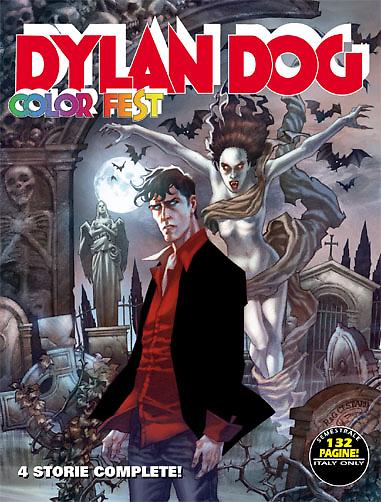 Introduction: Four stories to discover all the colors of horror!

Back in London, Dylan Dog has a little accident on an isolated and dark street. Forced to ask the first passing car for help, the Investigator will learn the hard way how dangerous it is to accept a ride from a stranger…

Those who end living under the “Bad Bridge” have lost everything in their lives. To survive, they can only resort to their dignity. Until someone or something doesn’t snatch also that from them, changing unlucky homeless people in mad suicides. To solve the puzzle, the Old Boy will have to join the deep ranks of this desperate people.

For the last thirty years, Dawn McCurtin appeared in every TV show in the United Kingdom. Her face’s so well known to be recognized by everybody. But it’s been a while since this “diva” began to vanish. Not only from people’s memory, but even from photos and recordings of her...

Just like so many years ago, one of the mannequins in the Dastan department stores came back to life and, just like at that time, its goal appears to be killing everybody that crosses its path. Dyll rushes on its tracks in a race against the clock, to try and prevent yet another massacre.