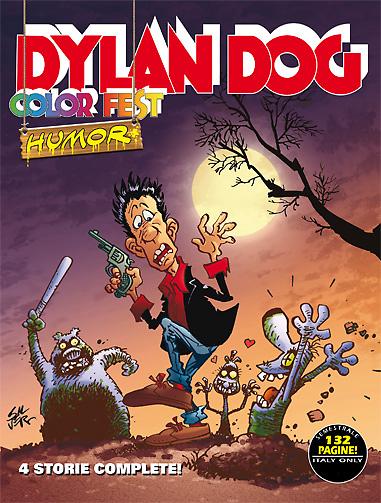 Introduction: A double meeting with color!

There are doors that should remain shut, just like the one Dylan Dog and his new fiancée cross, entering a mysterious “second London”, inhabited only by puppets moved by less-than-peaceful purposes.

Changes can always scare a little, especially when it’s our body to change, beginning for inexplicable reasons to gain weight out of all proportion and in an unstoppable way, soon becoming a terrifying prison of flesh.

For the Nightmare Investigator an awakening with its head in a guillotine, without knowing how he got there, is only the beginning of the most incredible and absurd day in his life. A hellzapoppin’ of impossible situations and crazy characters will severely test his nerves.

An envelope containing a letter with no words on it brings the dweller of Craven Road to an old friend in need. A mysterious entity is wiping away his existence and sooner or later will come to reclaim the last thing he’s still holding on to: hope!