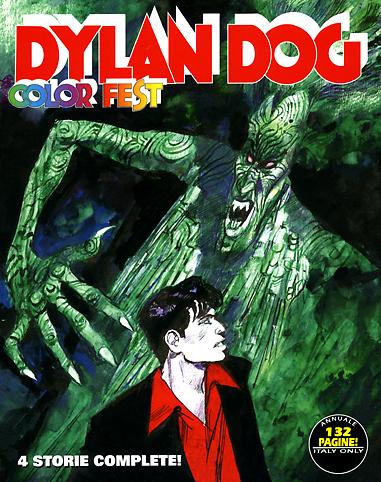 Cover: Sergio Toppi
Nemici per sempre
Plot and script: Tito Faraci
Artwork: Giuseppe Camuncoli
Colori: Fabio D’Auria Among the wild animals in the London Zoo, roams a creature whose cruelty is far beyond that of any beast. There’s no cage that can hold is need for blood. To stop this entity, Dylan will have either to hunt it, or to become its umpteenth victim!

Closed inside an oven, with his hands and feet bound, the Nightmare Investigator has to try and recollect the beginning of a dark fairy tale that is ironically similar to the beginning of this misadventure of his. If his memory will fail him, this adventure could be his last!

Lost in the darkness that so fascinated her, young Kelly never came back home, finding in the bowels of the earth somobedy who had long been waiting for her: a husband, whose power could give her everything she wants… but the price for that will be very high!

Among the worst nightmares the dweller of Craven Road had to face, a place of honour goes to Philip Crane, a.k.a. Mana Cerace, the man of the dark. Already defeated in the past, but never annihilated for good, the diabolical monster is back killing people, called back to life by those who dared insult his name!