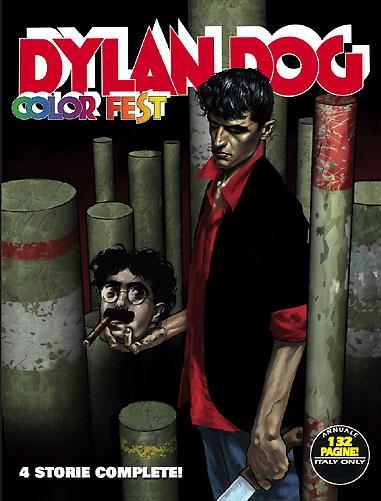 Introduction: All the colors of fear! Dylan Dog Color Fest is back!

In a not-so-desirable future, the living dead became a part of the industrial production chain and were forced to take the most humble and degrading jobs. Inspector Dog, disgusted with human brutality, is called to make a choice that will be crucial for the surviving of life on our planet.

What if future, instead of being “already written”, was “already recorded”? Would it be feasible to change the program that fate has in store for us, if we see in advance the video-recording of our death? That's what Dylan has to find out in the hours that separate him from the moment when he'll face his killer!

Ethan Warwick is a business genius. His knack for anticipating the trends of the financial market allowed him to become rich and successful. But this position was reached by Warwick by means of many sacrifices and a compromise with a past where a disquieting secret lies— and it's a secret that seem custom-made for the Nightmare Investigator…

For Dylan Dog and a young girl in need for help a quiet walk in the streets of London will become a merry-go-round of horrors when the city is unexpectedly and devastatingly stricken by the ghost of a war against an unknown enemy.