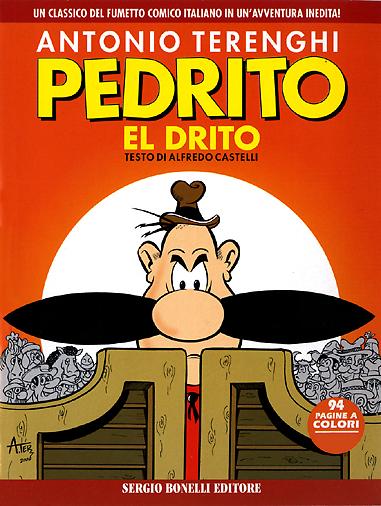 Introduction: He's the bravest, the most skilled, the fastest, the most intrepid and mustachioed marshall of the entire Wild West… Pedrito El Drito!

Antonio Terenghi & Alfredo Castelli celebrate the 50th birthday of Pedrito El Drito with a new exciting adventure of the marshall with the long mustachioes and the passion for good wine. Pedrito has to face the threat of the treacherous Tony Terry, who’d like to remove him from the position of keeper of law and order in Tapioka City to convert the town in a criminal empire. To achieve his goal, Tony is ready to weave a complicated scheme of lies, to discredit Pedrito and unleash a war between two fierce Indian tribes— the Pistilli Forellati and the Alluci Allucinati. The villains that conspire against Tapioka City didn’t reckon with Paquita who, for the love of her mustachioed husband, doesn’t demur from going to battle... and this will mean trouble for everybody involved!