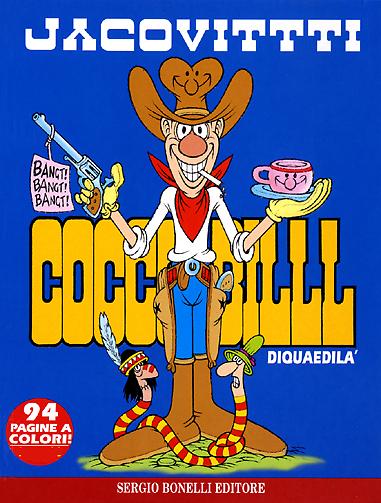 Introduction: The cowboy who only drinks chamomile travels through a Wild West filled with bees, cactus, socks, dice, fish spines, snails, pencils, salamis and a thousand other marvellous things created by Jac's fantasy.

The first instalment of the series "I grandi comici del fumetto". For its debut, what better endorser than the famous Cocco Bill by Jacovitti that also celebrates his 40 years of career with this special adventure. As usual, the chamomile-drinking cowboy will go through a series of hilarious episodes, in a crazed foray on the tracks of Minnesòreta, revisiting in a comical way all the commonplaces of the Western genre.