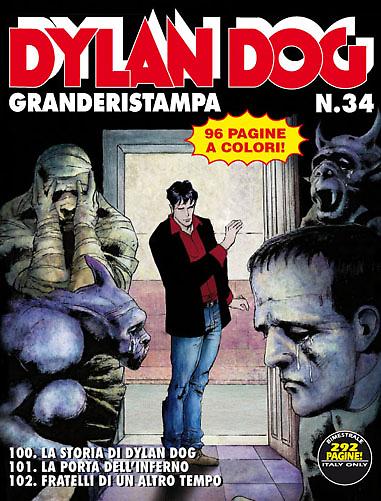 Introduction: The 100th adventure of the Nightmare Investigator, the murderer of the Gibbs and a prehistoric invasion!

Dylan Dog’s galleon is finished! The last piece is stuck on to the mock-up and an immense magnum opus seems to have finally been completed. It’s time to look back, dispel the mists and answer the thousands of questions that constantly pursue us. What is hidden behind the immortal Xabaras, the eternal enemy of the Investigator? Where did the love for the unreachable Morgana spring from? And who is Dylan Dog really? A journey to the origins, which becomes lost in time and space…

Charles Gibbs can no longer manage to live. Three years ago his wife and daughter died at the hands of a ferocious murderer and this blew his mind. Now the madman has started killing again, following the obsession of a satanic ritual, but the infernal doors he is trying to open wing wide open onto a doubt: was he really the one that slaughtered the Gibbs family? Fratelli di un altro tempo
Plot and script: Luigi Mignacco
Artwork: Corrado Roi

A mammoth is walking past Big Ben. And London is invaded by prehistoric animals, that have been extinct for millions of years… They are only incorporeal visions, but who has created them? Shielded by the most impenetrable secret, something – or someone – is bringing back to life a very ancient past of mankind. Is this the work of a magic power or of the cold technology of a science gone mad?