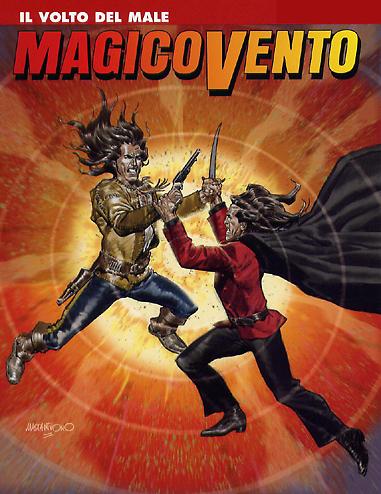 Introduction: Aiwasss bloodthirsty fury is unleashed at full force, but the necromancers face is that of Magico Vento!

It seemed as if everything was over: Ned finally free from the Inferno of the Ancient Ones and the necromancer swallowed up for ever in another dimension. But Aiwass has reincarnated himself once again, this time taking on the appearance of Magico Vento himself: they are two perfect clones, but in opposition to each other in the form of Good versus Evil. Aiwass’s bloodthirsty fury is unleashed, but everyone, first and foremost the secret services, attributes his heinous crimes to Ned. This time, it’s not going to be easy for Ned to rid himself of his deadly enemy: their spirits and bodies have become inextricably intertwined and whichever of the two were to eliminate the other would also eliminate himself!