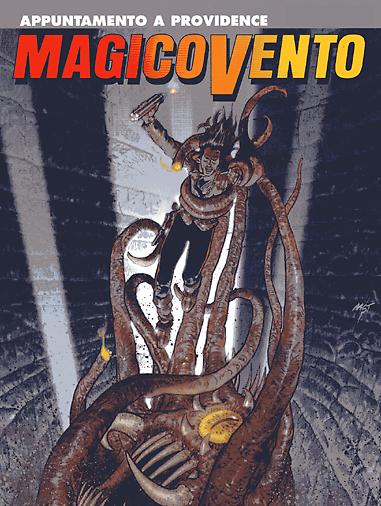 Introduction: While Poe investigates the Black Vault, Magico Vento tries to get away from the depths of the hell of the Ancient Ones.

In Providence, the city renowned in later days as the birthplace of H.P.Lovecraft, the Black Vault has its hidden temple. Poe is trying to locate it, in the company of federal agents Henry Task and Boris the Great, the former illusionist who has entered the ranks of the secret services, but the search turns out to be more complex than expected. Providence looks to be a quiet town, but beneath the surface there runs a carstic river of legends about witches and vampires. Might they have something to do with the sacred claw purloined from the Smithsonian Museum? Meanwhile, in the dark and forbidding underground reign of the Ancient Ones, two prisoners are struggling to get back to daylight: the necromancer Aiwass and Magico Vento, two sworn enemies, but both trying desperately to find a way out of those infernal labyrinths, so full of terrible menaces and populated by monstrous creatures.