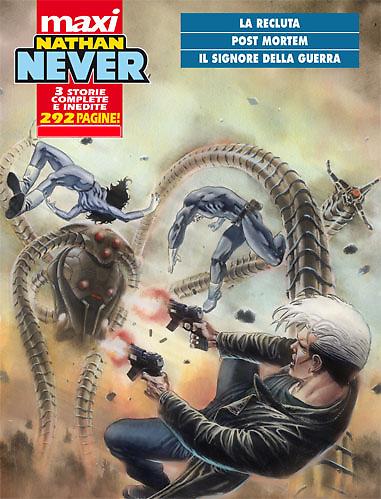 Introduction: Three new investigations for Nathan, from the streets of East City to the desolated lands of the Margin!

On a mission, Nathan replaces an old friend from the time he was a policeman, Lieutenant Mark Corkman: along with the young cadet Ray Gonzales, the Alfa agent will have to make sure that a valuable witness safely gets to the trial where she’s the only one who can testify for the prosecution... but very dangerous killers are on their tracks, and apparently they’re able to anticipate all their moves.

Brad Grocers, the director of the insurance company "ForLife", is viciously killed in his own office by a creature endowed with a monstruous strenght. The young woman, Meg Barrett, is shocked by this piece of news and, after asking the police for help, to no avail, goes to Nathan Never: the girl is convinced that the killer is her father, William, back from the grave to take revenge on the people who betrayed him...

Somebody that’s seemingly acting on behalf of the Revolutionary Army of the Margin, under the lead of the ruthless Ralph Stonhenge, is perpetrating a series of dire terrorist attacks in different parts of the world: among those attacks there’s the explosion of a passenger train near Bataan, in the Territories of the Margin, and the poisoning of a diplomat on the mountains of Kehlsteinhaus, in Old Europe. After an investigation, the main suspect appears to be special agent Nathan Never, from the Agenzia Alfa...