The conclusion of the encounter between Mystère and the “Abominable” Snow-Men demonstrates how humans can be far more abominable than the Yeti. After this, a series of events apparently unrelated to the Yeti mark the beginning of a new adventure for the Detective of the Impossible: In 1119, a mysterious mission is entrusted to the Templar Knights, while in our days, Martin investigates a series of ritual killings, and an electronics expert elaborates a frightful video-clip .

In this number : from page 5 to page 39, “L’Uomo delle Nevi”, by Prosperi and Tuis. From page 40, “La Setta degli Assassini”, by Castelli (from an idea of Ottonelli) and Roi. 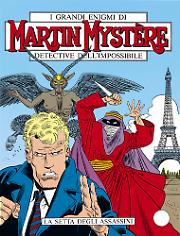