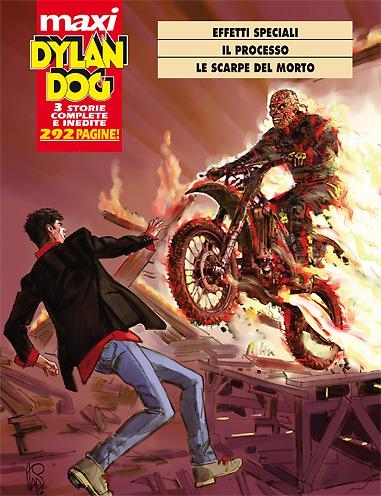 Introduction: Action! and then you die… a man who cannot prove his innocence… a pair of blood-red shoes…

Some stuntmen die on the set of several movies, where they played dangerous parts. Is it a series of tragic coincidences? Or is there somebody who’s disposing of these peculiar characters, one after another, just as were an endangered species?

When Dylan Dog agrees to help a famous lawyer to exonerate his client, who stands accused of the murders of some of his colleagues, he cannot fathom that – beyond a case that most consider already solved – there’s a hidden and shocking truthe, impossible to bring to court.

It’s well-known that a woman would be ready to do anything for a beautiful pair of shoes. Even slipping them off the feet of the warm corpse of the former owner. That’s how a seemingly harmless article of clothing, for somebody becomes an obsession to kill for.