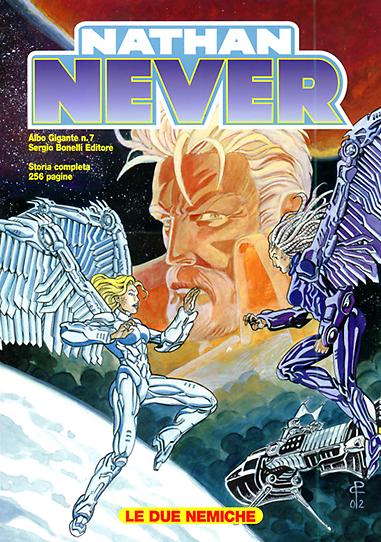 Introduction: In a parallel universe, the crew of Nautilus finds itself embroiled in a war beyond the bounds of time!

The war that has seen humans and technodroids fighting side by side in a bitter struggle against the mysterious “Grigi” has come to a conclusion with the defeat of the latter. The mind of Captain Nemo, who has by now received his final verdict of condemnation, has been transferred into the computer on board Nautilus, and Artisia has taken over the command, just in time to tackle a new danger: a dimensional crack has occurred in space, through which radio pulses are streaming in! Nautilus, steering into the crack so as to go shed light on the mystery, finds itself in a parallel solar system where there is a war going on between a demon empress and a rebel human alliance, supported by an extremely ancient guild of telepathic women! But the surprises don’t stop here: in the new universe, Artisia discovers she is surrounded by individuals and environments that are identical to those in the universe she has come from, including some of her nearest and dearest whom she had lost in tragic circumstances. What’s the real identity of the empress? What are her aims? Whose side will Nautilus take in the imminent conflict? Amid space battles, planet-wide clashes among humans, mysterious mutations and horrifying revelations, this seventh Gigante will keep you riveted to your chair right up to the final tragic dénouement!