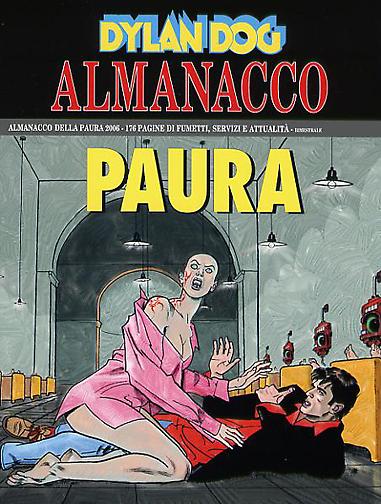 Introduction: Terror from the Land of the Rising Sun, werewolves from the 1930s to the present day, Pupi Avati's Po Valley horror!

In pitch darkness and rain at the dead of night, two young people who are trying to cross the freeway on foot are involved in an accident. One of them, badly injured, is taken to hospital for life-saving surgery. But during the operation, the patient wakes up, turns into a blood-thirsty beast and attacks the doctors, sinking its teeth ferociously into their flesh. Before the police can get to the scene, the young guy is killed and his body is burned by a mysterious individual who immediately stages a quick getaway and vanishes. Why did someone want to eliminate the guy so brutally? What did they want to hide? The answers, perhaps, are known only to the girl who survived the accident. She’s completely closed up in her own thoughts, and when Dylan tries to make friends with her, she will only answer to the name of “me”… This Almanacco della Paura 2006 is further enriched by three highly illustrated articles devoted, respectively, to literary, cartoon and cinematographic horror deriving from the Far East, the thousand faces of the werewolf (from the 1930s to the present day) and Pupi Avati’s Po Valley nightmares.