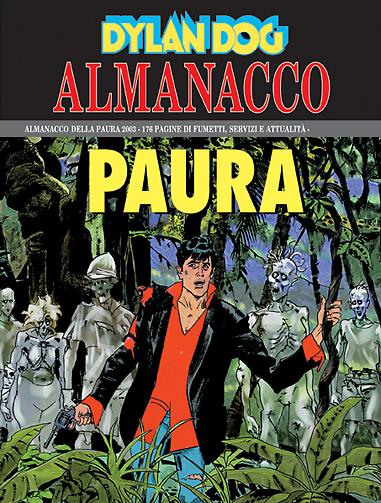 Introduction: Dylan Dog in a brand-new 94-page story: "The Dictator". Everything about the movies, videos and CD-Roms of the year. Dossier: The zoo of terror. Joe R. Lansdale, Death comes from Texas. In pitch darkness with Sam Raimi. Postcards from Hell. 176 pages of Spine-Chilling Thrills and Terror!

No-one is threatening the power of the dictator Galvez, the absolute overlord of Estrella Verde, except a tiny group of poorly armed “revolucionarios”, and in fact it proves to be none other than these who launch a rocket attack that strikes the presidential vehicle. Pilar the “bruja”, the witch who is actually the President’s lover, possesses the power to bring about what the eminent surgeons were unable to achieve at St.Martin’s, the prestigious London clinic where Galvez lies hospitalized, and she leads him back from the black path of death. But everything has a price, in this as in the other world, and the President raised from the dead is compelled to adhere to a very strict food regime in order to fully recover his strength. Thus, when a fine-looking nurse disappears from the clinic – an institution that was so dear to Lord H.G. Wells, who was also an inmate of St. Martin’s – only to be found horribly butchered on the banks of the Thames, Dylan Dog begins to investigate…