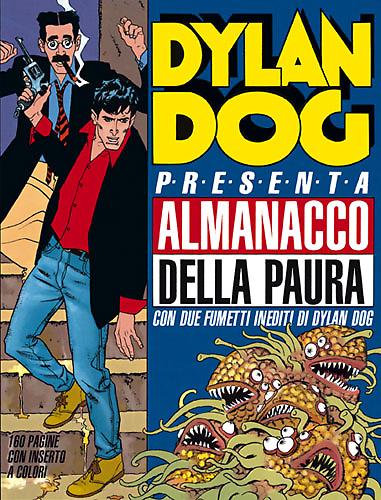 Introduction: All the horrors of 1990-1991: movies, TV, books, videos, comic strips; the "pukka" terrors of the last century; "Fear Mail" and the "Horror Club". An extensive dossier devoted to the great American writer H.P. Lovecraft. And, in addition, many other spine-chilling features. Two whole brand-new Dylan Dog episodes: "Dopo il Grande Splendore", by Sclavi & Pennacchioli, and "La cantina", a tribute to Lovecraft by Sclavi & Roi. 160 pages of Fear and chilling Thrills, with a full color section.

Plot and Script: Tiziano Sclavi
Artwork: Gabriele Pennacchioli
Cover: Angelo Stano
There will come a great light, to sweep away the world. It will come and flood everything with a radioactive rain… Who has killed Professor Briggs? What obsession torments Doctor Steiner’s nights? There are nameless monsters born from the atomic nightmare, innocent monsters hidden from the sight of mankind, and each of them is howling in silence its own right to life!

Title: La cantina
Plot and Script: Tiziano Sclavi
Artwork: Corrado Roi
Little Jonas doesn’t want to come down. Down there, underneath the manhole, there is a murky well of abominable horrors, a parallel universe populated by claws and tentacles. But it’s only the fervent imagination of a child…