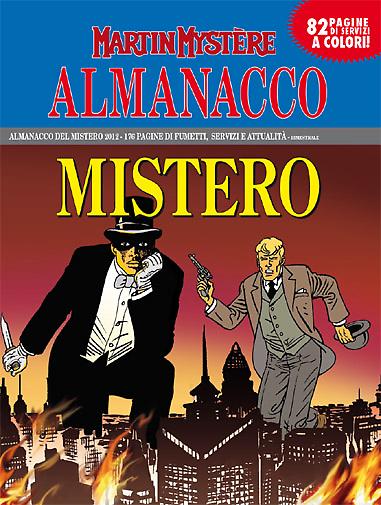 Introduction: A secret brotherhood asks the Detective of the Impossible for help, involving him in a secret war!

Martin Mystère is summoned in front of a disquieting character, Colonel Bozzo, leader of a secret brotherhood whose goals aren’t exactly crystal-clear. The Colonel is asking him for help. Reluctantly, the Detective of the Impossible listens to an intricated story made of plots, strange artifacts and ancient secrets that he completely ignored; and he’s unwittingly involved in an occult war, fought away from the eyes of the world. A war whose target is chaos itself, and whose main warrior bears an ancient and feared name… This year Almanacco also features everything about the “mysterious” books, movies, TV series, and videogames of the year, as well as files about Fantomàs, De Torquemada and the horrors of Inquisition, and the monsters behind the corner “seen” by Dino Buzzati.