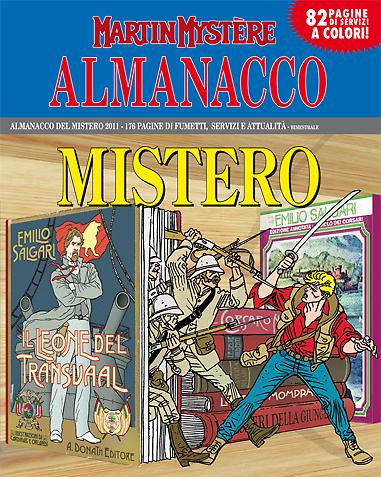 Introduction: A far away South African region conceals the origine of a lost novel by Emilio Salgari!


Year 1901, Transvaal, South Africa. The Anglo-Boer War is raging. The British prevail, but fights go on nonetheless. During a desperate sortie, a guerrilla warrior disappears and finds himself face to face with a mystery that will later catch the attention of a man belonging to the British Army; he’s not a soldier, though, but a ruthless killer ready to murder and torture to seize that secret. Somehow, the story comes to the ear of an Italian writer, who finds it very interesting… Year 2011. Martin Mystère meets a young and beautiful girl, specialized in Emilio Salgari’s life and works. According to her, the girl owns the notes and other material for an unpublished novel by the great writer: a work that, for unknown reasons, was never completed and published… This year’s Almanacco also features full-color files about Salgari himself, C.S. Lewis’ fantasy worlds and the secrets of the Invisible Man, as well as a wide overview of books, movies, TV series and videogames of the year in Mystery!