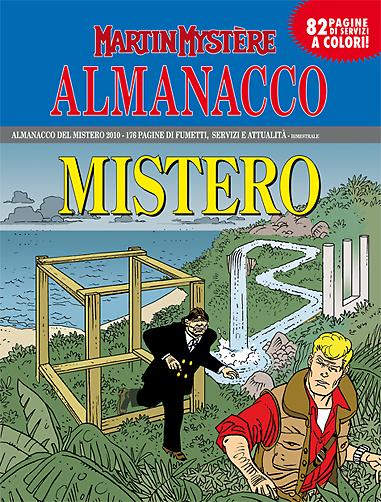 Introduction: An island beyond the world and time… A mystery-rich place!

Martin Mystère is asked to investigate about the mysterious disappearance of another “Detective of the Impossible”, a TV star who hosts a show quite similar to his own (and who’s one of his main competitors). The man ceased to be heard from, after embarking on a sea journey. Martin immediately dashes off on the tracks of his “rival”, ending up on a strange island where inexplicable phenomena take place — strange disappearances, similarly strange appearances, changes in the terrain morphology, and even an apparent loss of meaning of time itself. Is there an intelligence behind all these events? This year’s Almanacco also features files about “mysterious” islands, Abraham Merrit’s lost worlds, the investigations of the X-Files agents, and the usual outlook on books, movies, TV series and videogames of the year in Mystery.