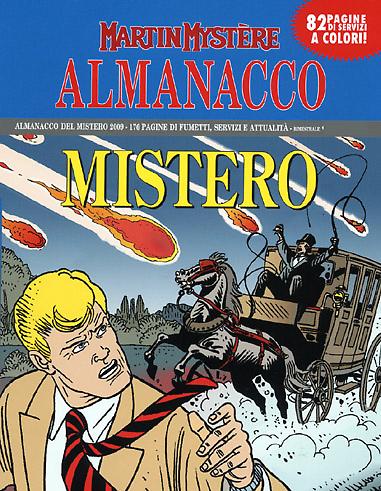 Introduction: A strange case of murder brings Martin Mystère from New York to Siena, Italy, to face a mysterious fraternity …

In 1795, a meteorite falls in the vicinity of Wold Newton, England. The event is watched by a group of locals, who are astonished by that extraordinary occurrence. Just one year before, a similar phenomenon happened in Italy, in Siena, this time with a “shower” of burning rocks. Is there a connection between the two events? And what were its effects on people who touched the “stones that came falling from the sky”? Martin Mystère investigates a murder case the brings him from New York to Tuscany, while a mysterious fraternity schemes in the shadows... These strange people are ready to try anything to preserve their secrets… This year’s Almanacco del Mistero also features dossiers about “reinvented heroes”, like “Dracula meets Sherlock Holmes”, Quatermass, a scientist always ready to save the Earth from the aliens, Edgar Rice Burroughs’s Lost Worlds and an overview about books, movies and TV series from this year in Mystery.