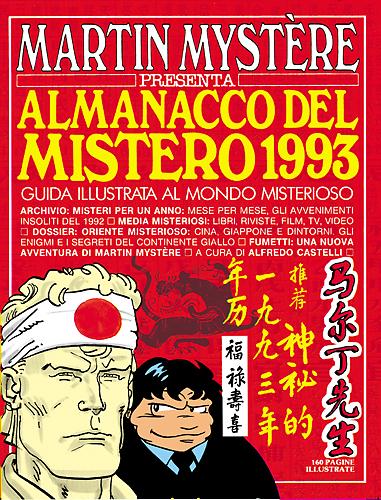 Introduction: There exists an Almanacco that has been around for at least three thousand years and which is almost as mysterious as ours. So where is it published? Oh well, that's obvious: in China, the land of mystery par excellence. To find out more and to learn about thousand of other unusual, enigmatic and curious facts, just plunge into the Almanacco del Mistero 1993, dedicated to China, Japan and all the other ever so mysterious countries of the "yellow continent". There you will meet with tigers and dragons, ninjas and samurai, flying turtles and immortal monks. And for those of you who are never satisfied, there's also a brand-new comic strip story set in the magic universe of the Martial Arts and, as you might expect, the unusual feature articles replete with bits of news from this and other worlds.

The editorial part is dedicated to all the mysteries of 1992, and to a dossier on the mysterious Orient, whereas in the comic-strip story, the Detective of the Impossible will have to deal with the Yakuza, with magic Japanese swords, with Ninja warriors, and above all, with “the nine-handed cut”: a very secret position which renders anyone invincible in the martial arts.

Note: Only the comic strip has been reprinted in MM Extra n. 14