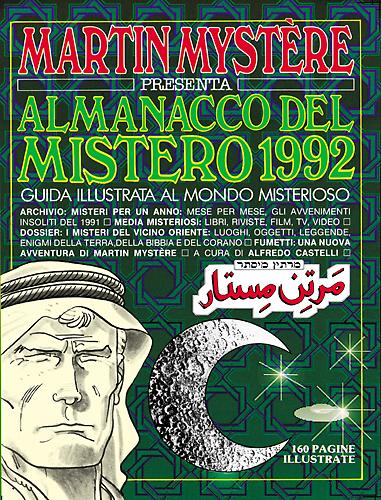 Introduction: The Almanacco del Mistero 1992 is dedicated to the mysteries of the Near East; therefore, since the Orient is mysterious in its own right, our Almanacco is doubly mysterious in this fifth edition. Here you will meet illuminated prophets and sinister divinities, secret libraries and forgotten civilizations, marine snakes and celestial serpents, flying camels and dancing dervishes. And this is not all, of course: the Almanacco del Mistero 1992 will, as usual, provide you with a selection of mysteries to fit all tastes and all wallets, feature articles, comic strips and variegated human specimens..

In the comic-strip adventure in the middle of the volume, Martin and Java are searching for a lost Terrestrial Paradise, but the discovery of Eden – which came about by sheer chance during the Gulf War – is the fore- runner to a catastrophic disaster. As for the editorial part, in addition to the usual section, which presents a round-up of all the mysteries of 1991, there is also a dossier on the mysteries of the Near East, the land of the three revealed religions.

Note: Only the comic strip has been reprinted in MM Extra n. 14