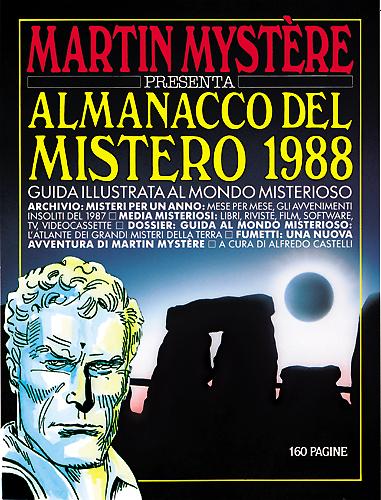 Introduction: Who built the lost city of Takht-I-Sulaiman? Why do strange lights appear every night on the slopes of Mt. Musiné? Where can one buy a Pyramid of Cheops endowed with therapeutic powers? Why do we always end up in the slowest toll lane at freeway exits? The Almanacco del Mistero 1988 has the answers for these and many other queries: from small everyday riddles to the most baffling puzzles of science, archaeology, and history. Also, Mysteries for a year, mysterious Media, the Atlas of the great mysteries of the Earth, a new Martin Mystère story...

The very first Almanac of the publisher Bonelli, at its first appearance. The first part of the Almanac presents all the strange events of 1987, as well as the books and films about mysterious subjects published during the year. The final part is taken up by a veritable atlas of the mysteries of the World. In the middle, a comic strip in which Martin and many other inhabitants of our planet become aware of a sudden cry for help, of unknown origin...

Note: Only the comic strip has been reprinted in MM Extra n. 4