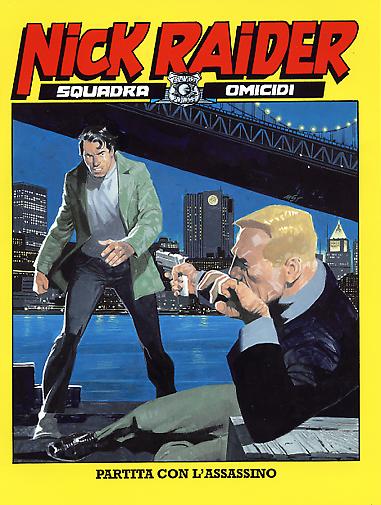 Introduction: Nick Raider in a brand-new 94 page story: Death of a police officer. Everything about the books, movies, videos and CD-Roms of the year. Dossier: When the gangs used to spread terror on the streets of New York. Vittorio Giardino, from Sam Pezzo to Max Fridman. Jean-Claude Izzo and the tough guys of Marseille. Carlo Jacono, under the sign of crime. 176 pages of Action, Investigations, Suspense!

Lee Forbett is a big shot in narcotics trafficking in New York. So it’s quite logical to think of his trade when it’s a question of nabbing whoever killed the woman who lived with him. Logical, but too simplistic. Nick Raider and Marvin Brown don’t overlook any possible line of inquiry, and since the devil hides in details, it’s actually a very faint lead, a small and apparently insignificant element, that spells the murderer’s downfall!