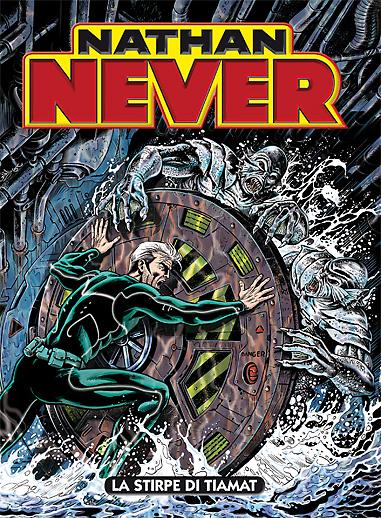 Introduction: In a besieged submarine base, Nathan Never has to discover the incredible secret of the monster sea creatures!

To save the three geologists who are trapped at the bottom of the ocean, Nathan Never calls an old acquaintance of his, the unfortunate Siamese twin of the billionaire, Calvin White. The man – who now goes under the name of Erik and has a part of his body made with artificial prosthesis, planted on him by the crazed Dr. Dickinson when he was separated from his brother – is the only one who could lead Nathan to the place where the three scientists are — the submarine base Tiamat where, isolated and forgotten, Erik himself survived for many years. But monster sea creatures, that look like mermen, will make Nathan’s mission harder than he thought...