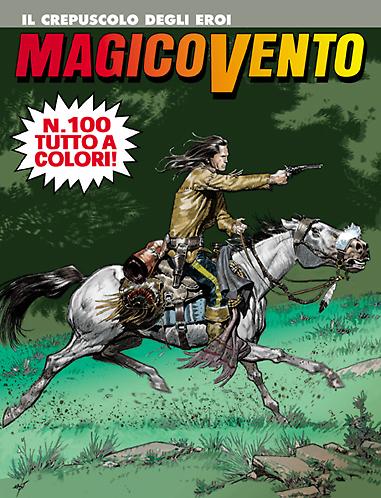 Introduction: The saga of the war reaches a crucial point, with a spectacular full-color album to celebrate 100 issues of Magico Vento!

General Custer is dead. At Deadwood, the scout poet Jack Crawford sings his Glories. But back in town, Fate has already set the clock ticking for a meeting with another hero of the West: Wild Bill Hickok. Poe is by his side as Hickok breathes his last, and he manages to deliver the murderer into the hands of the law so that justice can be done. But is there any semblance of justice at Deadwood? Meanwhile Ned, together with Cavallo Pazzo, is at the head of the long column of retreating rebel indians, who are being hounded down by General Crook’s troops. The prairies are set alight in order to discourage the pursuers, food is in short supply, the last buffaloes have to be sacrificed, and meanwhile winter is fast closing in and already promises to be bitterly cold. Slowly, but relentlessly, a rift is forming among the Sioux, and someone is already prepared to be disloyal, but who?