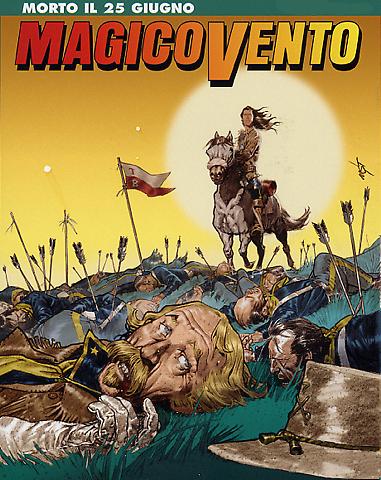 Introduction: The inevitable confrontation between Custer and the Great Plains tribes is fast approaching. Soon Little Big Horn will be running with blood

Only a few days have gone by since the battle of Rosebud. Magico Vento has taken shelter in an area that’s safely out of the way of the war zone so as to administer treatment to Toro Seduto, but then news reaches him that a fresh battle is about to take place at Little Big Horn, where Cavallo Pazzo has marshaled rebel indians from all the Great Plains tribes. General Custer has received orders to locate the indian encampment. His glorious Seventh Cavalry has been replenished with troops composed of rookies. Realizing that whatever decision is made will be considered to have been his doing, Custer hesitates between the excitement of battle and troublesome omens of death. Magico Vento, for his part, already knows that Custer is going to be defeated. A whole series of visions have revealed this… But what will be the impact of the final outcome of the battle?