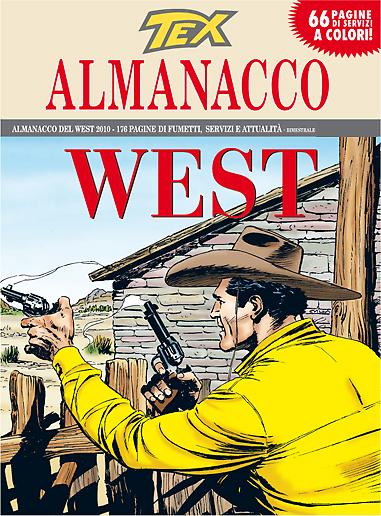 Introduction: The perpetrators of a daring robbery still are at large, but tex has a plan to track them down!

Tex is entrusted by the Rangers HQ with the custody of Ray Bonner, a young man sentenced to life after a bloody robbery, and to escort him to Yuma prison. The guy didn’t tell who his accomoplices in the bank robbery were, and nobody still knows their whereabouts and where are the $ 30.000 they stole. The Rangers fear that Bonner could be set free by his mates during the transfer or that they’d try to shut him up forever. When Tex arrives at Flagstaff sheriff’s office, someone already got rid of the young Ray, poisoning him while he still was in his cell. The Ranger is still determined to bring the criminals into the open, and involves his son, Kit, in a very dangerous plan!... This year Almanacco also features full-colour stories about the movie “Shane”, the Sand Creek massacre and Walter Hill cinematic heroes, as well as our usual overview of books, movies, TV series and videogames of this year in Western.