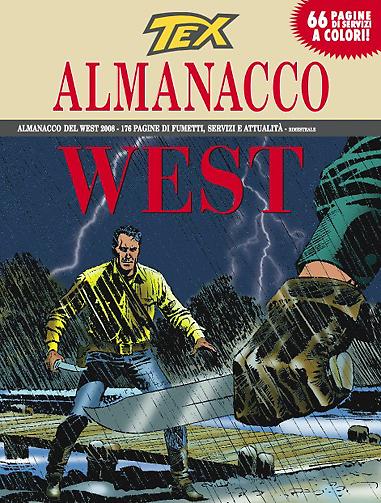 Introduction: Tex, determined to avoid another bloodbath, steps in between the crazy Dumont and former bounty-killer Cannon…

In Southern Texas, Corpus Christi is the scenery for the evil deeds committed by the gang of Daniel Dumont, a convict escaped from the criminal asylum. The crazy villain plans his every move following the results of his trusted pack of tarots, that urges him on a vengeance path: Hannibal Cannon must die! Cannon is a former bounty killer who helped Tex send Dumont to jail. Now the three enemies will be facing each other once again! The Almanacco is completed by files about Robert Aldrich, Hollywood's last rebel; the true story of Jesse James, the legendary “Missouri Robin Hood”; and the female writers who told the tales of the Frontier.