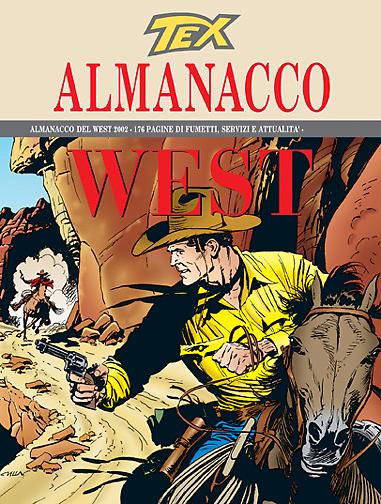 Introduction: Tex in a complete 110-page comic strip: "L'ultimo squadrone". Everything about the books, movies, videos and CD-Roms of the year. Behind the scenes of the Western, Italian-style. Dossier: Patriots and Red Coats. James Stewart, the secrets of a quiet man. 176 pages along the wild trails of the West!

If even a wise chief like Maguas has decided to step beyond the boundaries of the San Carlos reservation, then something very very serious must have happened. The real problem, however, is that it’s the firebrands of the tribe who are taking advantage of that flight; they’re led by Shako and have no compunction about totally laying to waste the settlers’ ranchos. A mounted squadron is on its way to intercept them, but Tex is unable to avert the worst-case scenario… And as an accompaniment to this dramatic adventure of Aquila della Notte, there’s a real surprise for all his readers: a hundred-page book, with a wealth of pictures and testimonies, dedicated to the life of Gian Luigi Bonelli, his artistic itinerary and his unforgettable paper creatures!