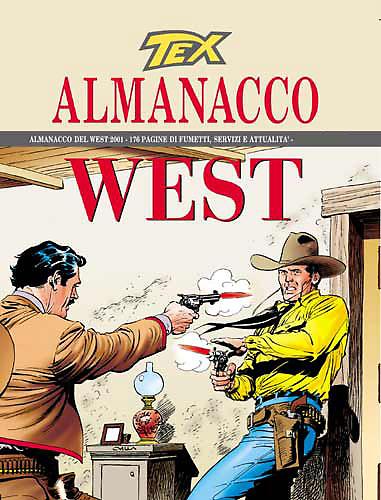 Introduction: Tex in a complete 110-page comic strip: "Missione a Sierra Vista". Everything about the books, movies, videos and CD-Roms of the year. Dossier: cinema on the side of the Indians. The last cowboys of Corman McCarthy. The Little Sheriffs. 176 pages along the wild trails of the West!


There’s a mysterious murderer in the remote desert locality of Sierra Vista: every two or three months a girl is found dead with her throat slashed. The local sheriff has been chasing him down for years, but without success. The sheriff isn’t the only one who’s hunting the serial killer: a police inspector from Baltimore, Nick Martin, has traveled right down to the south of Arizona to pursue his investigations after uncovering disturbing similarities between the modus operandi of the Sierra Vista murderer and the habits of a criminal who had been active until just a few years earlier in the inspector’s own city, and had then vanished completely. Only, the police officer has now vanished as well, and might be a victim of the same murderer, on the assumption that the latter felt the authorities were on his heels. At this point, intervention by Tex is the only way to solve this case!