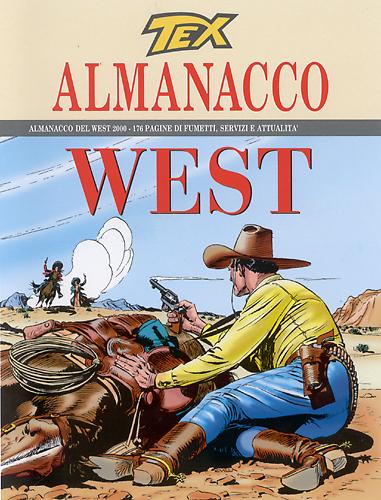 Introduction: Tex in a complete 106-page comic strip: "La legge del deserto". Everything about the books, movies, videos and CD-Roms of the year. Dossier: The Indian scouts. Randolph Scott, the stony-faced cowboy. The Frontier as told by Louis L'Amour. 176 pages along the wild trails of the West!

The features reporting on the books, movies, videos and CD-Roms of the year open an Almanac that offers a range of articles and dossiers on three key themes: Indian scouts, the Frontier as told by the novelist Louis L’Amour, and the filmography of the unforgettable actor Randolph Scott. In the comic strip story, a band of robbers pull a heist on the bank in Wellton and then flee to Mexico, taking a hostage with them, the very young Johnny Ellison. The young kid seems to have taken a liking to Dave Rogers, one of the crooks, who in his own peculiar way is a faithful friend and more than once protects the kid against his own scoundrelly accomplices. But time is running out for the scoundrels; Tex and the kid’s father are leading a group of volunteers who are hunting them down. In the midst of scorching dust-swept deserts, under starlight and under the blazing sun, hounded by fierce bandoleros, the chasers and the hunted are playing an infernal match that must run its course to the bitter end!