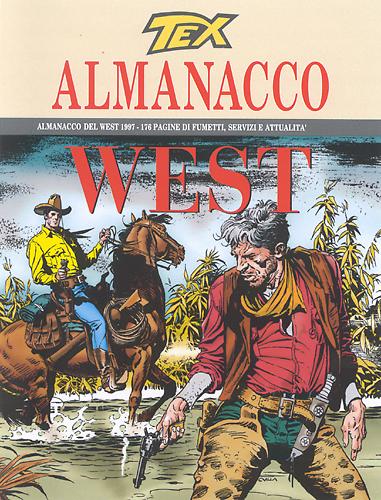 Introduction: Tex in a complete 102-page comic strip: "Bad River". The books of the year. A glance at the past: the Western in the world of movies. George Armstrong Custer: the man of Little Big Horn. Colt, Winchester, Remington, Gatling: the firearms that won the Frontier. 176 pages along the wild western trails!

An overview of the books of the year and a retrospective survey of western cinema: these are the great features inaugurating an Almanac that also profiles the legendary General Custer, as well as Cocco Bill, the amusing cowboy created by Benito Jacovitti, and the weapons that explain “how the West was won”. In the comic strip story, the cowboy Clint Jackson, who has served a ten-year term in the Yuma penitentiary on a murder charge, is released and goes back home, to Bad River, where the atmosphere is so tension-laden you could cut it with a knife. Tex immediately sides with the former convict. In town it’s widely believed that Clint killed Adam, the bailiff of Lance Stoddard’s ranch and brother of buxom Linda. It’s an intricate business, because Linda has tied the knot with Luke, the scion of the wealthy rancher; furthermore, there was once a hint of tenderness between Linda and Clint… What terrible truth is hidden within this family drama?