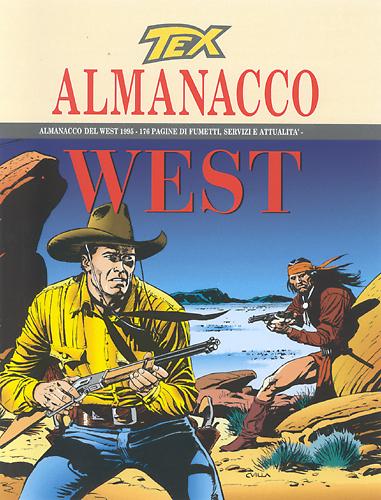 Introduction: Tex in a complete 94-page comic strip: " La carovana della paura". The year of the Western: everything about the books, movies and videos. Sam Peckinpah: the last buscadero. Women of the Frontier. Blueberry: the Western seen from the Seine. 176 pages along the wild western trails!

In addition to the usual news features, this second Almanac of the West presents three key articles: one on the women who left a lasting mark on the Frontier era, one on the film director Sam Peckinpah and one on Mike Blueberry, the “tall, dark, handsome man of few words” who is a hero of French comics. In the comic presented in this Almanac, Tex and Carson have to stop the fierce Apache Saguaro, who is thirsting for revenge. At Yucca City, two ugly mugs have murdered Nahiva, the Indian woman who lives with the Apache, and have then joined a convoy heading for California. The Native American warrior has no knowledge of the identity of the murderers and so, one by one, he eliminates all the members of the convoy of carriages. The two pards must stop this massacre, unmask the blackguardly killers, and Saguaro can get his revenge!