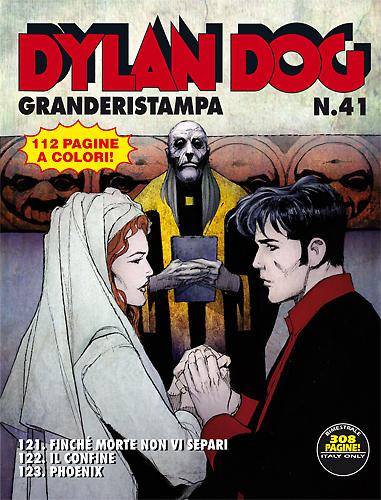 Hidden in a time warp there’s an anniversary Dylan never forgets. An encounter going back to so many years ago, in the land of Ireland. On an island enflamed with hatred, the Investigator found an infinite love, shattered by the horrors of an endless war. She is no more, beautiful Lillie, with her russet locks and her melancholy dreams, her furious desire for freedom, her courage, her madness… But her memory is always there, hidden in a time warp!

Take a step through the door of life. Beyond the threshold, you will find Magus, the keeper of the border, poised barely a step away from death. His damnation is his inquisitiveness: he wants to know what material the two faces of existence are made of, and this is the reason why he detains travelers in his personal limbo. But who is Magus? Dylan Dog has to rip off his mask and perhaps discover… the face of eternity!

Memory or dream, or perhaps only the hallucination of a sudden death. Phoenix is tormented by an image she cannot explain. Who is Lullaby? What links two women who are so far away? Perhaps a case of reincarnation? Dylan is in the dark: possibly, two lives may have become intertwined quite by chance, like pawns exchanged by an absent-minded hand… on the chessboard of death!