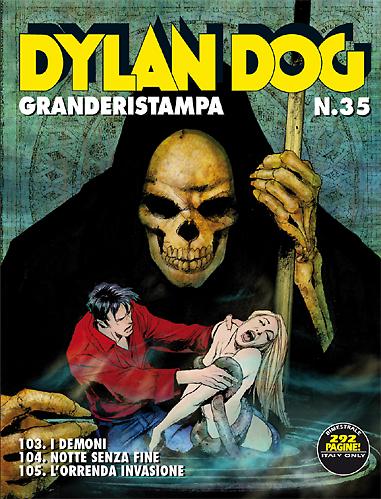 Introduction: A race against the clock, a journey through dreams and a London invaded by rats!

A raging thirst and a blazing desert. Infinite solitude and omens of imminent death. And it is in this land of horror that nightmares live. There is a poison coursing through Dylan Dog’s veins, and no-one knows the antidote to it. Twenty-four hours of life to discover who is the murderer, one day (or just a little less) to decipher an ancient alchemy and escape from the embrace… of demons!

Angels and hellish presences, a murderer who’s a prisoner of insomnia and Dylan Dog closed in eternal darkness. Time has stopped, just as time stands still in the immobile flow of a coma, and the entire world seems to have been placed under the spell of interminable sleep. A new enigma that the Investigator has to unravel in his night-time solitude, because it is not until deep in the night that he discovers that "we are the stuff of which dreams are made"...

Strange noises… Through the walls, in the sewerage, in the elevator well, can’t you hear them? There’s something squeaking, scratching, struggling to get out! It’s thousands, millions of tiny starving mouths, horrible rats ready to get fat on your flesh! You can’t stop them, there’s no poison, no trap capable of blocking this devouring horde! It’s a huge nightmare, and in the whole of London there’s only one man that is chasing nightmares…