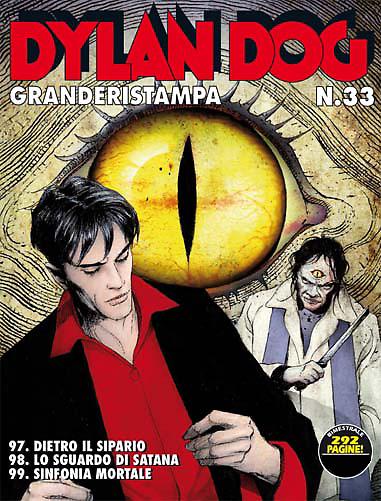 Introduction: Two unusual twins, a nightmarish film director and a spell hidden in a vinyl’s grooves...

Paul Ganz, the famous comedy writer, has become rich by writing stories that other people act out. But perhaps – muses Dylan Dog – he has himself begun to act a part. Who is the merciless killer that is trying to kill him? What’s the trickery underlying his morbid relationship with his twin Michael? What is this impenetrable gentleman hiding on his stage behind the curtain of his life?

The dream so many would-be film directors cherish is to shoot a movie of crazy scenes populated with horrendous monsters without spending a cent on special effects, and to make a low-cost horror movie, but how can it be done? Julius Gronberg may have found the solution. Because Julius has realized that the simplest way to shoot nightmare scenes is to go look for them in the place where they arise: in the human brain!

Music and alchemy… Nobody suspects what could be hidden in the black vinyl of a disc. It’s not "satanic rock" but something far worse, something far more real. Within that symphony, there’s the spell of ancient knowledge, there’s a monstrous power that wants to enter into our world. Dylan Dog will have to arm himself with a fine sword and fine courage to engage in a duel with a veritable Knight of Darkness!