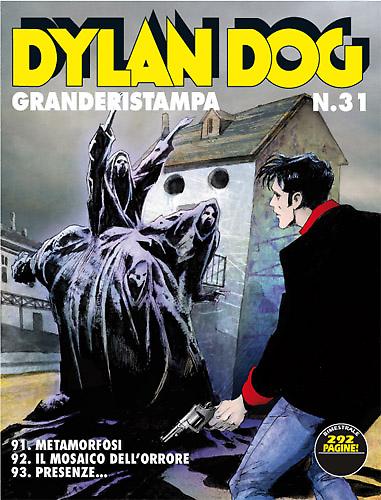 Introduction: A tragic change of looks, Bloodsbury's curse and a voice asking to kill Harvey Zorex!

Beauty, wealth, an existence glittering with success. Rebecca Stanford has really everything... everything but her body! Looking at her image reflected in the mirror, Rebecca suddenly discovers Maude Randall’s deformed features. A mental exchange, a telepathic fusion, a sort of witchcraft?

Strange accidents, shadows of madness, hallucinations… A black night has enveloped the Bloodsbury district. Small slivers of fear slip between the bricks of reality, and, little by little, they are breaking it up into bits. Is there an ancient curse slipping between those houses, that have been long-forgotten and are laden with evil... or is it something more uncatchable? Dylan Dog listens to the mystery of Bloodsbury and hears a distant voice. Perhaps there is a secret horror struggling to come up to the surface!

"You must kill Zorex…". The lawyer Harvey Zorex is a man obsessed by power, ready to trample upon anything and anyone. Someone believes it’s time to get rid of him... But who is it? Where does the dream persecuting Dylan come from? A man with a disfigured face and a wavering voice is begging, demanding, claiming the treacherous Harvey’s death. A voice emerging from the distance, from the most intricate labyrinths of time…