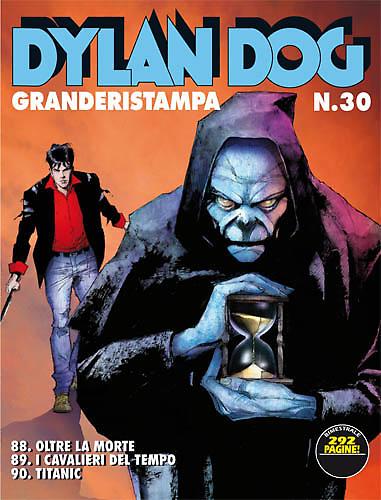 Introduction: An agreement with Death, fairytales becoming a bloody reality and a sinister cruising trip...

Bree Daniels is dying, and a part of Dylan’s dying with her. Only Death herself, old mate in so many trips, can find a way out, but Death’s advice is tough to take. One life for another one, Investigator! That’s her offer: kill or let them kill you and I will save Bree. And the occasion is close by, because the terrible serial killer Johnny Dark is back to launch a mortal challenge…

There’s always an extremely mighty spark of fantasy in a writer’s mind... But this time it’s too much. The poor Sabrina sees her medieval tales’ characters turned into monstrous creatures. Dragons, witches and bloody knights rush into reality. To chase them away, she and Dylan Dog will have to hunt them down and find them in the village of Rockland, that lies in the thrall of an evil spell, where they’ll have to face the power of dreams…

Who are the Innauts? Legendary demons, powers emerging from the depth of mind? Lender Pierce met them and died. Now it’s Dylan’s turn to find out their secrets, but he has to face them in a hostile environment, the sea. A cruise towards death, hanging on black waters. What is hiding under the sinister Titanic’s deck? What is the linkage of blood which keeps its passengers together?