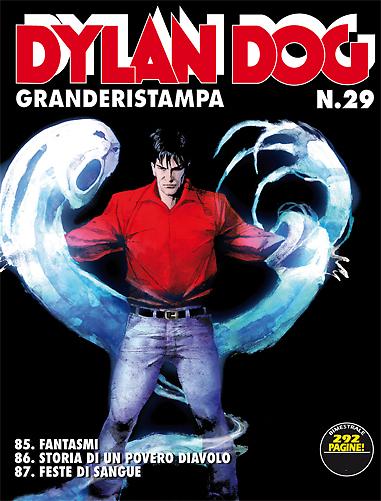 Introduction: A dangerous séance, a crazy story with a whiff of brimstone, and a blood red Christmas!

Five boys, a boring night... Why not organize a séance? An innocent game turns into a nightmare where there’s no way back, because by shuffling the cards of the other world, you can catch the ace of spades! Peggy and her friends have awoken the spirits’ anger and they have to escape their revenge now. Dylan Dog is looking for some sense in this chain of mysterious deaths. Could the madness of the living be hiding behind the dead’s apparent fury?

A funny little man asserts he’s a “second-class demon”. And a priest armed with a gun walks about in London. An incredible epidemic of homicidal madness. And a hospital in which they investigate where the common cold comes from... What keeps all these things together? It’s a complicated enigma, but it’s not impossible. And it can be solved by following the thoughts of a demonic mind... though a little bungling one!

People are better at Christmas time... more or less. Mr. Grant has given most of his properties to the homes for the poor of the city, but London homeless and tramps don’t seem to appreciate his gesture. They turn into horrible monsters and tint the parties’ snow with a blood red colour. It’s a trip into defeated human nature on the streets for Dylan Dog, searching for a faceless curse... A Christmas nightmare creator!